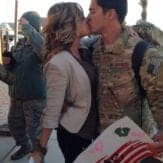 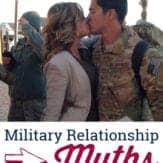 Military relationships get a lot of attention, both within the military community and by those looking in on it. Television shows like Army Wives don’t always help the situation, though they can give the civilian community a glimpse of some of the things this life entails.

Related: 37+ Love Quotes Your Wife Will Actually Believe You Wrote

Myth#1: All military relationships are marriages.

Nope. Military relationships do not always involve marriage. In fact, in 2017 only about 52% of the service members were married. Let’s not assume that the other 48% aren’t in any kind of relationship, because that’s just bonkers.

Even as recently as a few years ago, military relationships would naturally evolve to marriages because of the “sweet benefits” of being married. Things like moving with your service member, housing allowances, and of course those awesome discounts. But marriage is not the only way to be in a long-term relationship with a military service member.

Myth #2: Those marriages happen when both partners are young.

Nope. Well, kind of. Statistics are showing us that military marriages do happen at a slightly younger age than the civilian population. But we also see plenty of marriages happening later in life.

Nope. Though this one has some history behind it. War marriages are often quick, and we’ve been at war for almost 20 years. But for every military marriage that happened under six months of dating, there’s one where the courtship lasted years.

Quick marriages are a matter of timing, and sometimes the military speeds up that timetable. Other times, it slows things down, waiting for a deployment to end, graduation from college, or just the opportunity to spend enough time to together to be able to commit.

Big nope. The military divorce rate is actually on the decline and has been for the last decade. In 2018, 3% of service members married at the start of the year were divorced by the end of it.

It’s almost impossible to compare this to the civilian population, as those statistics are calculated very differently, it’s easy to debunk this myth because if 3% of service members are divorcing each year, it means 97% of them are staying married.

Myth #5: Everyone cheats in a military relationship.

Nope. Military relationships go through some of the toughest things out there and yet not all of them do not have issues with infidelity. There isn’t much research in this area within the military community, but our best guesses and experiences with military relationships indicate that people cheat regardless of the situation they are in.

If being away from your significant other causes you to cheat, then you’ll cheat whether they are gone for a weekend on a golf trip of 12 months of deployment.

Nope. In fact, less than half of the military families and those in military relationships have children. Only 43% of military service members had children in 2016. Less than half!

This may be really surprising when you look at so many programs and resources focused on military children. Now, imagine how you would feel if you don’t have kids and in your in our military community. It’s time for all of us to realize that kids aren’t a guarantee in this life!

Nope. Just like we’ve seen trends of young marriages and trends of lowering divorce rates in the military, we see changes in everything. A decade ago, multiple deployments were much more common than they are now. A decade ago, you could pretty much count on your service member being gone half the time between training, schools, and deployments.

For some, this is still the case, but for most of the military, the operational tempo has slowed down a bit. And for some, a deployment will never be a part of their career.

You know, the kind that sides with you in a disagreement and asks their mother to please respect your child-rearing habits. Chances are your spouse will ruin your marriage by the way they handle situations before your mother-in-law will.

Nope. While the military may have stopped “supporting” geo bachelor situations a few years ago, military families are still doing them. Simply put, when a service member moves to a new duty station (not deployment) without their spouse or children they are a geographical bachelor.

And while this is a hard situation for sure, military spouses are finding some freedom in knowing that they can make these decisions. That they don’t have to give up everything to move, again. That they have the option of keeping the kids in the perfect school or continuing treatment with a specialist.

Are you new to this community? Start here, friend.
306 shares 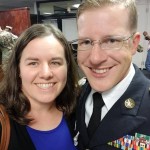 Rebecca Alwine is an army wife, mother of three, and lover of her adorable pirate dog. Over the past 12 years, she’s discovered she enjoys coffee, lifting weights, and most of the menial tasks of motherhood. Her days consist of CrossFit workouts, audiobooks, and pretending to cook while her Instant Pot does all the work. Her motto: work smarter, not harder.

Prev Post The Most Important Words You’ll Ever Say to Your Upset Child.
Next Post 14 Best Going Away Gifts Your Friend Will Remember