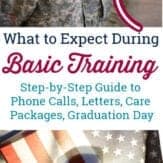 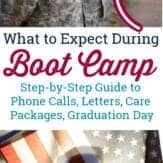 Inside: What to expect when your service member leaves for basic training – care packages, letters, phone calls – we break it all down!

If someone you love is going off to Boot Camp or Basic Training, you’re probably nervous about the lack of communication. Don’t worry, we have answers!

My own husband went to Boot Camp in 2001, which was before social media or cell phones existed.

I wanted to get up-to-date info, so I polled veterans, spouses, and girlfriends who recently went through Boot Camp or Basic Training to ask how they stayed in touch.

Surprisingly, many of the rules haven’t changed.

There are no cell phones allowed in Basic Training. This is a consistent rule for all of the military branches: Do not expect your service member to be able to call you, text you, or receive your messages when they are in Basic Training.

Even though there are no cell phones, the military training allows a few phone calls home from their call centers.

There will be an initial very brief call (lasting less than one minute) where the service member can call home, report that they have arrived and provide a mailing address. This call is typically to their next of kin, so if you are dating they may call their parents.

Most branches are very restrictive about what the recruits can receive in Basic Training. Generally, no gifts or care packages can be sent. Sending restricted items, or ‘contraband’ could get your recruit yelled at or publicly embarrassed.

Stick to the official packing lists and follow any family instructions from the unit. Occasionally, families are allowed to send bulk items that will be shared with the whole platoon.

If you plan to send care packages after Boot Camp or Basic, save these ideas!

Can you write letters during Basic Training?

The best way to stay in touch is with snail mail letters. Recruits don’t have much free time, and are only able to write on Sundays or occasionally in the evenings. However, your letters can be a huge source of comfort for them.

Many people said they wrote almost every day, then sent an envelope each week containing multiple letters.

You can also send sealed “Open When” letters, such as “Open when you’re having a bad day.” They will be able to keep the letters with them until they are needed. Several people reported that they would smuggle a stick of gum into each letter, which their trainee enjoyed!

Include a veteran quote, missing him quote or long distance relationship quote inside your letter for an extra special touch!

Another girlfriend wrote, “I signed each letter with my thumbprint, so he could have a little piece of me.”

You can print out pictures and send them in letters. Do not send anything racy or inappropriate! Regular photos or ultrasound pictures are acceptable.

Quote ideas to put inside your letters:

Initial letters will take a while to be delivered. Families have recently been encouraged to send letters through the Sandboxx app.

This program coordinates with the Basic Training classes to print out and deliver letters quicker than the Post Office. They will also provide recruits with an envelope for a reply letter.

When do you get details about Family Day and Graduation? What can I expect for that day?

At the end of Basic Training, loved ones are invited to attend a Family Day where they visit with their recruit. Boot Camp Graduation is usually the following day.

Because these events are the same for most graduating classes, you can find details on the websites and Facebook pages specific to your service member’s Basic Training program. Family members are encouraged to follow specific Facebook groups so they can see photos of their recruit throughout the process.

Basic Training is a challenging time apart, but it will fly by when you stay busy writing letters and making plans!

Are you new to this community? Start here, friend.
825 shares