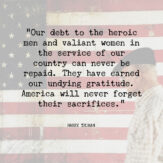 Veteran quotes are the perfect way to thank a veteran and convey a message when you’re not quite sure what to say on Veterans Day.

To the average civilian, this act of gratitude might not seem important. But to our service members, it means everything. I think most veterans would affirm this directly.

You may even want to include a motivational military quote or unique military gift with one of these quotes below.

Or you can teach your kids to thank a veteran and include a quote with it too.

This list is carefully curated by a military family gathering quotes over the years from active duty service members, retired veterans and other military families.

1. “Our debt to the heroic men and valiant women in the service of our country can never be repaid. They have earned our undying gratitude. America will never forget their sacrifices.” — Harry Truman

2. “America without her Soldiers would be like God without His angels.” — Claudia Pemberton

3. “The willingness of America’s veterans to sacrifice for our country has earned them our lasting gratitude.” – Jeff Miller

4. “The veterans of our military services have put their lives on the line to protect the freedoms that we enjoy. They have dedicated their lives to their country and deserve to be recognized for their commitment.” – Judd Gregg

5. “I respect every soldier, from every country, who serves beside us in the hard work of history. America is grateful, and America will not forget.” – George W. Bush

6. “While we can never do enough to show gratitude to our nation’s defenders, we can always do a little more.” — Gary Sinise

7. “Some people live an entire lifetime and wonder if they have ever made a difference in the world. A veteran doesn’t have that problem.” — Ronald Reagan

8. “Without heroes, we are all plain people. And don’t know how far we can go.” — Bernard Malamud

9. “If there is only one word to describe a military veteran, it would be ‘sacrifice.'” – Unknown

10. “On this Veterans Day, let us remember the service of our veterans, and let us renew our national promise to fulfill our sacred obligations to our veterans and their families who have sacrificed so much so that we can live free.” — Dan Lipinski

12. “We often take for granted the very things that most deserve our gratitude.” — Cynthia Ozick

13. “This country has not seen and probably will never know the true level of sacrifice of our veterans.” — Thomas M. Smith

14. “And the truth is that all veterans pay with their lives. Some pay all at once, while others pay over a lifetime.” J.M. Storm

15. “As we express our gratitude, we must never forget that the highest appreciation is not to utter words, but to live by them.” – John F. Kennedy

17. “A hero is someone who has given his or her life to something bigger than oneself.” -Joseph Campbell

18. “My heroes are those who risk their lives every day to protect our world and make it a better place — police, firefighters, and members of our armed forces.” — Sidney Sheldon

18. “May the flag wave boldly with its vibrant hues…honoring veterans like you, with the beautiful red, white and blue!” – Unknown

20. “A hero is someone who understands the responsibility that comes with his freedom.” — Bob Dylan

21. “We sleep peaceably in our beds at night only because rough men stand ready to do violence on our behalf.”- George Orwell

22. “Never was so much owed by so many to so few” –Winston Churchill

23. “Honoring the sacrifices many have made for our country in the name of freedom and democracy is the very foundation of Veterans Day.” — Charles B. Rangel

24. “America’s veterans embody the ideals upon which America was founded more than 229 years ago.” — Steve Buyer

25. “While only one day of the year is dedicated solely to honoring our veterans, Americans must never forget the sacrifices that many of our fellow countrymen have made to defend our country and protect our freedoms.” -Randy Neugebauer

Veteran Quotes on Courage and Bravery.

26. “America was not built on fear. America was built on courage, on imagination, and an unbeatable determination to do the job at hand.” – Harry Truman

27. “Soldiers, when committed to a task, can’t compromise. It’s unrelenting devotion to the standards of duty and courage, absolute loyalty to others, not letting the task go until it’s been done.” — John Keegan

32. “If a man hasn’t discovered something that he will die for, he isn’t fit to live.” – Martin Luther King Jr.

33. “To command is to serve, nothing more and nothing less.” – Andre Malraux

34. “Those who stand for nothing fall for anything.” – Alexander Hamilton

35. “Bravery is the capacity to perform properly even when scared to death.” — Gen. Omar Bradley

36. ”Whoever said the pen is mightier than the sword obviously never encountered automatic weapons.” – Douglas MacArthur

37. “The soldier above all others prays for peace, for it is the soldier who must suffer and bear the deepest wounds and scars of war.” — Douglas MacArthur

39. “Cowards die many times before their deaths; the valiant never taste death but once.” – William Shakespeare

41. “Soldiers can sometimes make decisions that are smarter than the orders they have been given.” – Orson Scott Card, Enders Game

42. “I am not afraid of an Army of lions lead by a sheep; I am afraid of sheep lead by a lion.” – Alexander the Great

43. “The brave die never, though they sleep in dust: Their courage nerves a thousand living men.” — Minot J. Savage

44. “Bravery is being the only one who knows you’re afraid.” – Colonel David Hackworth

46. “If your actions inspire others to dream more, learn more, do more and become more, you are a leader.” – John Quincy Adams

47. “Perfect valor is to behave without witnesses, as one would act were all the world watching.” — Francois de le Rochefoucauld

48. “Valor is stability, not of legs and arms, but of courage and the soul.” — Michel de Montaigne

49. “The brave men, living and dead, who struggled here, have consecrated it, far above our poor power to add or detract. The world will little note, nor long remember what we say here, but it can never forget what they did here.” — Abraham Lincoln

50. “The true soldier fights not because he hates what is in front of him, but because he loves what is behind him.” — G.K. Chesterton

51. “Courage is resistance to fear, mastery of fear—not absence of fear.” — Mark Twain

52. Courage is contagious. When a brave man takes a stand, the spines of others are often stiffened.” — Billy Graham

53. “In war, there are no unwounded soldiers.” — José Narosky

54. “Regard your soldiers as your children, and they will follow you into the deepest valleys. Look on them as your own beloved sons, and they will stand by you even unto death!” –Sun Tzu

56. “Freedom is one of the deepest and noblest aspirations of the human spirit.” – Ronald Reagan

59. “This will remain the land of the free only so long as it is the home of the brave.” – Elmer Davis

60. “A hero is someone who understands the responsibility that comes with his freedom.” — Bob Dylan

67. “From time to time, the tree of liberty must be watered with the blood of tyrants and patriots.” ― Thomas Jefferson

68. “Honor to the soldier and sailor everywhere, who bravely bears his country’s cause. Honor, also, to the citizen who cares for his brother in the field and serves, as best he can, the same cause.” — Abraham Lincoln

69. “One flag, one land, one heart, one hand, one nation evermore!” – Oliver Wendell Holmes

72. “Our flag does not fly because the wind moves it. It flies with the last breath of each soldier who died protecting it.” – Unknown

73. “The willingness of America’s veterans to sacrifice for our country has earned them our lasting gratitude.” — Jeff Miller

74. “I think there is one higher office than the president, and I would call that patriot.” — Gary Hart

77. “America’s veterans have served their country with the belief that democracy and freedom are ideals to be upheld around the world.” — John Doolittle

78. “How important it is for us to recognize and celebrate our heroes and she-roes!” — Maya Angelou

79. “Better than honor and glory, and History’s iron pen, Was the thought of duty done and the love of his fellow-men.” — Richard Watson Gilder

80. “There is a certain enthusiasm in liberty, that makes human nature rise above itself, in acts of bravery and heroism.” — Alexander Hamilton

81. “The patriot’s blood is the seed of freedom’s tree.” —Thomas Campbell

82. “The willingness with which our young people are likely to serve in any war, no matter how justified, shall be directly proportional to how they perceive the Veterans of earlier wars were treated and appreciated by their nation.” — President George Washington

83. “To us in America, the reflections of Armistice Day will be filled with lots of pride in the heroism of those who died in the country’s service and with gratitude for the victory, both because of the thing from which it has freed us and because of the opportunity it has given America to show her sympathy with peace and justice in the councils of the nations.” — President Woodrow Wilson

84. “It’s about how we treat our veterans every single day of the year. It’s about making sure they have the care they need and the benefits that they’ve earned when they come home. It’s about serving all of you as well as you’ve served the United States of America.” — President Barack Obama