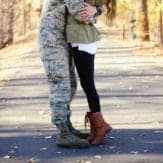 Inside: Before becoming a military wife, you never realize what you’re getting into. Learn 7 things about military life after 10 years of military marriage.

My husband and I recently celebrated our 10 year anniversary. It’s hard to believe I’ve spent a decade as a military spouse.

I’ve come a long way since that first day I got my “dependent” ID card and went into the Commissary.

“Honey…” I said, “why is there a line of shopping carts all the way back to the freezer section?”

He didn’t know. He had never gone into the Commissary either. Turns out, we happened to enter on payday. It was an intimidating first experience, for sure!

Before we married, we spent seven years dating long-distance (it’s a long story, but let’s just say there were lots of deployments during that time.) Because of this long dating period, I thought I knew what I was getting into as a military wife.

Seriously, I had spent years thinking about it. I had visited his barracks, seen him deploy, attended military balls, and witnessed a few promotion ceremonies. I thought I knew the basics of military life.

Then we married, and I discovered that I knew nothing about being a military spouse.

When I become a milspouse, I didn’t expect…

1. How much time I would spend alone.

Sure, I knew there might be deployments in his future. He deployed three times while we were dating, so I thought I was used to it.

What I didn’t realize were that there were numerous other times he would be away from home: classes, training, TDY assignments, Duty, field ops, workups… the list goes on.

Even in non-deployable units, there are usually several days per month he isn’t home. I’ve adjusted to it now, but it was a shock during the first year.

2. That he would spend a whole career in the military.

By the time we married, my husband had already served seven years. With only one year remaining on his military contract, our plan was for him to get out and go back to school.

Then, the economy crashed and there was a hiring freeze in his field. We couldn’t afford housing on my income alone… so he re-enlisted. I didn’t “sign up” for a military marriage. We hadn’t planned to move our family all over the world for the next ten years. But that’s how it worked out.

3. How much the military would control our lives.

Seriously, this was an adjustment. You want me to carry around an ID card and show it every time I leave our house? Or get groceries? And you can’t tell me where we will be living two months from now because we are waiting for someone to fill out paperwork?

The military controls a lot in our life and our marriage. They determine where we live, how often I see my husband, and where our kids can go to school. Love it or hate it, that’s the milspouse life.

4. The diversity of the military community.

The military will open your eyes to the variety of people living in our country. Before we married, I only met a handful of military families. They were mostly white…and from Texas.

Now that we have spent time living on many military bases, I know that military spouses come in all colors, ages, sizes, and political beliefs. Never assume that someone believes the same thing as you, simply because you are both military spouses.

The military community can be your best support system during a deployment. Sure, we spouses can have drama… but a spouse is also the first person I call when a kid is sick, my car breaks down, or anything goes wrong at home.

People have amazed me with their generosity. Military wives reached out to me when I had deployment babies and volunteered to bring me meals, watch my kids, or mow the lawn. I once had an amazing friend who insisted on coming over to clean my house. That made a huge difference to a mom of three during a deployment.

6. That the kids can still have a good relationship with their deployed dad.

There was a time I was afraid my deployment babies would never know their dad. We took family photos before his combat deployments, just in case he never came home.

Now they are growing up and experiencing their third and fourth deployments as military kids. Amazingly, they all have a tight relationship with dad, despite how much time he has sent away. They joke together, play sports, and (when he’s around) do scouting activities together.

His recruiter promised that he would see the world. That bothered me for years, because he only ever visited Iraq and Afghanistan.

Then…we were incredibly lucky to get orders as a family to live in Rota, Spain. While the move was tough with three kids, the culture and travel opportunities there were amazing! We fell in love with Spain. (I even wrote a book about it called Welcome to Rota.)

While there, I got to visit several new countries, including Morocco. Between travel and deployments, he has now visited almost every continent in the world. Well played, recruiter, you were actually right.

Military life has been full of surprises. It wasn’t what I expected. In some ways it has been harder than I thought. But in many ways, it’s better than I ever imagined. 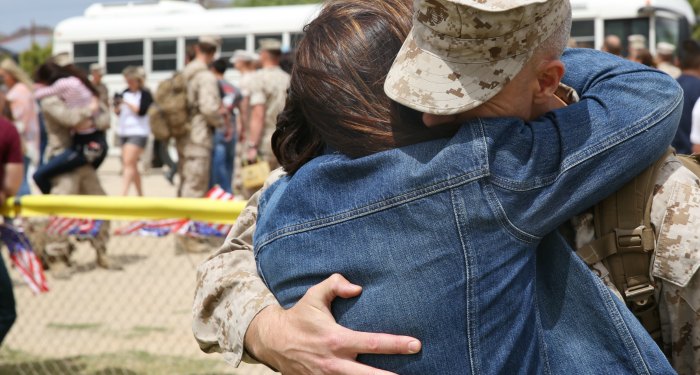 Are you new to this community? Start here, friend.
348 shares