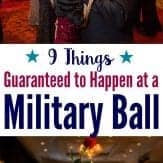 Inside: Learn what to expect at a military ball beyond finding the perfect military ball dress. Plus, learn several things you shouldn’t do.

When my boyfriend (now husband) invited me to his first military ball, neither one of us was sure what to expect.

I’d attended high school dances like prom and homecoming, but he told me the military ball was different because it was a serious occasion.

He gave vague instructions on what to wear: “a nice dress” and told me “I didn’t need to eat anything at the airport since dinner would be served at the ball.”

Well, he was partially right.

Dinner was served… but not until 8 PM, when the ceremonies had concluded. During the opening ceremonies, I tried to ignore my rumbling stomach and focus on the events.

There was a lot of sitting and standing. We heard from a guest speaker. Witnessed a flag procession. And a cake cutting ceremony. There was also an empty table for fallen comrades, which brought immediate tears to my eyes.

By the time dinner was served, I felt overwhelmed, hungry, and a little jet-lagged from flying across the country that morning. So far, the event felt nothing like Prom.

It was solemn, traditional and moved me to tears. But all around us, people were chatting and taking pictures.

Many of them started drinking earlier in the day. I saw scandalous dresses. When the dance floor opened and the DJ started playing the Cha-cha slide, I suddenly understood why people compared the ball to prom.

If you are attending your first military ball, you should be prepared for all of this.

Yes, it is a solemn occasion filled with military traditions. It is also a social event, filled with alcohol, laughter, and dancing. Be prepared for anything to happen, but keep your eyes peeled for these common sights.

This post contains affiliate links as part of the Amazon affiliates program, which means if you make a purchase, at no additional cost to you, I will earn a commission. See our full disclosure policy here.

Yes, ladies are expected to wear a full-length gown to most military balls. Some people go all-out and have a full-length train, but that usually makes them stand out as a bit too overdressed. A knee-length dress would stand out as underdressed. So go for something in between. Think prom, but classier.

Apparently people have different interpretations of a ‘prom dress.’ Sometimes you’ll see dresses that are way too short and would be more appropriate in a club. Or two-piece dresses that reveal the belly.

There are dresses entirely covered in sequins (why?) or backless dresses. I have even seen clear platform shoes

Many people match their dress to the service member’s uniform. The Army can end up with a room full of blue or gold dresses, while the Marine Corps Ball is full of black or red gowns.

Want to stand out and get a lot of compliments? Wear an unrelated color like orange or purple!

It happens every year. Someone buys a dress online that looked great on the model, but…not as great on them. Some dresses have plunging necklines with way too much cleavage. Others have low backs that show an underwear or thong.

If you have to ask, “Does this dress reveal too much?” then the answer is probably a resounding YES.

Yes, military balls have a cash bar. There will be long lines. Many people start pre-gaming earlier in the day.

I’ve seen people bring their own flask to the table

, drunk service members vomiting on the bus ride home, and once even witnessed a Marine pass out…right into the birthday cake.

Don’t be that person! Since dinner isn’t served until late, make sure to balance your alcohol intake with meals or snacks during the day.

For some branches, attending the ball is mandatory, even if you don’t have a date. There is usually a table full of guys and gals without dates. Don’t judge—some unmarried service members have significant others who live far away.

A military ball ceremony begins with a flag procession. There may also be a sword detail, drums, and someone singing the National Anthem. Don’t try to go to the bathroom during this part (it’s totally uncouth to leave the room).

Most units host their ball close to the branch’s birthday, so they serve a birthday cake. Everyone wants a selfie

Yes, a ball is also a dance. After the ceremonies and dinner are over, there is usually a DJ, lights and dance music. This is the part of the night where everyone cuts loose and has a good time.

You will see women dancing barefoot because their feet hurt. You’ll see older officers break out into the Cha-Cha Slide.

And you may see a group of women dancing with each other instead of their dates. Have fun and enjoy yourself, but try not to embarrass your date!

My first military Ball was overwhelming.

Since then, my husband and I attended about ten military balls together. Each one is a little different, especially as we get older. But we have seen all these things at every single ball.

in no time at all!