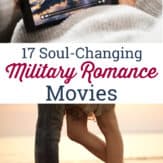 When I seek out a military romance movie, I want to feel it in my soul. Do you relate?

I want something that is palpable and leaves a movie hangover, which is why I’ve curated the best military love movies from Netflix and beyond.

(If you’re looking for a good cry just skip right to the modern military movie Taking Chance and you will cry for 1 hour and 17 minutes. Not a romance but definitely soul-changing!)

In addition to modern romance films, I also included a few older favorites from the 80s, 90s and 2000s.

And if you’ve recently watched the 2022 hit Purple Hearts, you’re going to absolutely LOVE the movies on this list.

As a military spouse and being married to an Active Duty Marine for over 10 years, I know a decent military romance flick. I’ve watched them all.

Some require you to put on your “movie goggles” more than others. Meaning, you’re going to have to overlook a few unrealistic scenarios or protocol mess-ups (i.e. Nicholas Sparks movies).

I’m here for the romance and the heart of the story. Maybe you are too? If so, keep on reading, it’s about to get good!

Emotionally moving about the intense realities of the Iraq and Afghanistan wars on military relationships.

Navy S.E.A.L. sniper Chris Kyle’s (Bradley Cooper) pinpoint accuracy saves countless lives on the battlefield and turns him into a legend. Back home with his family after four tours of duty, however, Chris hauntingly discovers that it is the war he can’t leave behind.

Evokes bittersweet emotions! A tale of war and romance mixed in with history.

The story follows two lifelong friends (Ben Affleck and Josh Hartnett) and a beautiful nurse who are caught up in the horror of an infamous Sunday morning in 1941.

One of the most iconic movies ever made! As students at the United States Navy’s elite fighter weapons school compete to be best in the class, one daring young pilot (Tom Cruise) learns a few things from a civilian instructor that are not taught in the classroom.

The newer version – Top Gun: Maverick – is a great movie too, but less of a love story.

I loved this modern military romance. In spite of their many differences, Cassie, a struggling singer-songwriter, and Luke, a troubled Marine, agree to marry solely for military benefits. But when tragedy strikes, the line between real and pretend begins to blur.

A Nicholas Sparks’ book turned into a romantic drama about an Army Special Ops soldier (Channing Tatum) who falls for a conservative college student while he’s home on leave.

Of course it’s more cheesy than other romantic military-themed movies, but enjoyable to watch.

A young man (Richard Gere) must complete his work at a Navy Officer Candidate School to become an aviator, with the help of a tough Gunnery Sergeant and his new girlfriend.

A Marine (Zac Efron!) travels to Louisiana after serving three tours in Iraq and searches for the unknown woman he believes was his good luck charm during the war.

This is another Nicholas Sparks book turned into a movie.

Watch, Rent or Buy on Amazon
Watch on Netflix

In 1942, a Canadian intelligence officer (Brad Pitt) in North Africa encounters a female French Resistance fighter on a deadly mission behind enemy lines. When they reunite in London, their relationship is tested by the pressures of war.

An American soldier struggles with an ethical dilemma when he becomes involved with a widow of a fallen officer. Stars Woody Harrelson, Ben Foster and Samantha Morton.

When a young soldier (Liam Hemsworth) in Vietnam gets dumped by his girlfriend back home, he and his best friend decide to go AWOL and return to the States to win her back.

Watch or Buy on Amazon

Post World War II, a British colonel and his wife (Keira Knightley) are assigned to live in Hamburg during the post-war reconstruction, but tensions arise with the German who previously owned the house.

Holy movie hangover! This one will stick with you long after it’s over. War is only part of this movie, but the effects of war on relationships is a huge heartbreaking theme of this movie.

In the early 1900s, three brothers (including Brad Pitt) and their father living in the remote wilderness of Montana are affected by betrayal, history, love, nature, and war.

Watch, Rent or Buy on Amazon
Watch on Netflix

At the close of World War II, a young nurse tends to a badly-burned plane crash victim. His past is shown in flashbacks, revealing an involvement in a fateful love affair.

In the waning days of the American Civil War, a wounded soldier embarks on a perilous journey back home to Cold Mountain, North Carolina to reunite with his sweetheart.

Thirteen-year-old fledgling writer Briony Tallis irrevocably changes the course of several lives when she accuses her older sister’s lover of a crime he did not commit.

A high school swim champion (Ashton Kutcher) with a troubled past enrolls in the U.S. Coast Guard’s “A” School, where legendary rescue swimmer Ben Randall (Kevin Costner) teaches him some hard lessons about loss, love, and self-sacrifice.

Both Kevin Costner and Ashton Kutcher are dreamy in this Coast Guard romance movie.

Intense! Personally, I’m not a huge fan of Tobey Maguire, but if you’re looking for something emotionally intense and jarring this is for you!

While on tour in Afghanistan, Sam’s (Tobey Maguire) copter is shot down and he is presumed dead. Back home, it is his screw-up brother (Jake Gyllenhaal) who looks after the family (and falls in love with Sam’s wife!). Sam does return, but with a lot of excess baggage – trauma from war.

Are you new to this community? Start here, friend.
154 shares