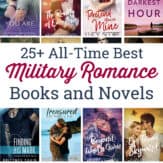 As a military spouse married to an Active Duty Marine for over 10 years, I know quality military romance books when I read them.

In fact, looking at many of the military romance novel lists, I am shocked that they rarely contain some of the best stories written.

Case in point, Rebecca Yarros is the daughter of two retired military officers and spent 20+ years as a military spouse of an Active Duty Air Force service member. (He is now a retired apache helicopter pilot.) As an author, Rebecca lived through the Iraq and Afghanistan wars while her husband was deployed — and injured! If there is anyone who is most qualified to write a military romance book, it is her. And if you look at all the lists out there, she is absent.

Well, that tells you that most current lists are missing the very best military romance books you’re wanting!

Now if you’re looking for historical military romance, I highly recommend The Things We Cannot Say by Kelly Rimmer or The Nightingale by Kristin Hannah. Both five stars! (And if they don’t appear as romance at first glance, trust me and read until the end. You will have a serious book hangover from the love story.)

This list below, however, is mostly modern romances and most are quite steamy.

The following books are all written by military spouses or veterans (some retired, some active duty). And in my opinion, these authors know how to craft both steamy romance and military life authenticity.

My top recommendation is The Things We Leave Unfinished. But all three are excellent options.

The majority of this series was written while Rebecca’s husband was an active duty service member. The first four are Air Force romance novels about apache helicopter pilots and the final novel – The Reality of Everything – is a Coast Guard romance.

The following books are part of The OCONUS Book Series (7 books) and The Rambler Battalion Series (5 books). These are sweet military romances – more sizzle, less steam.

Lots of books to choose from but these are my top recommendations to start:

If you’re looking for Marine romance novels this is your author!

Here are a few of her most popular titles:

Jessica has multiple Army romance series including Coming Home Series and The Falling Series. They focus mainly on veterans recently home from the Iraq and Afghanistan wars and the struggles they face.

While Harris is a military spouse, I would say her Hostile Operations Team® books are better for those looking to escape into military fantasy than military romance authenticity. Think billionaires, mob bosses, etc.

There is both a Strike Team 1 and Strike Team 2 series and are steamy Special Ops romance books.

Deaton also writes more what I would categorize as military fantasy romance in her Combat Hearts series, which includes Army, Air Force and FBI themes.

The following authors in the military romance space are the most popular and recommended by avid romance readers, and as you can see, they tend to write complete series on a group of service members.

Most books in the series follow Air National Guard pararescuemen as the main characters.

4. The Left Side of Perfect by Meghan Quinn (Duet Books)

The basic gist: Seven sexy and irresistible soldiers who find their courage and heart tested like never before in the battle for love.

Each book in the Midnight Delta Series is a romantic suspense stand-alone with its own happily-ever-after, they can be read in any order, however you might enjoy them more sequentially.

8. The Titan Series by Cristin Harber

Ben is a family bodyguard who broke Bridget’s heart when he left without an explanation five years earlier. He did it to protect her, and now he’s come back to get his girl.

3. Finding His Mark by Brittany Sahin

Full-length standalone off-the-books black ops SEAL team romantic suspense novel with no cliffhanger and a happily-ever-after. Book 1 of 10 in a Stealth Ops series.

Susan Stoker is a well-known first responder romance author who also writes military romances. She has an extensive list of books to choose from, and I’ve chosen two that I’d recommend reading first: Finding Lexi and Protecting Caroline.

This is SEAL Team Hawaii Book 2.

Protecting Caroline is the 1st book in the SEAL of Protection Series. It can be read as a stand-alone, but it’s recommended you read the books in order to get maximum enjoyment out of the series.

6. The Darkest Hour by Maya Banks

7. The Unsung Hero by Suzanne Brockmann

Suzanne Brockmann’s Troubleshooters series showcases the blending of intense adventure with sensuous romance. Book 1 is The Unsung Hero, a heart-pounding tale of love that reveals hidden truths and brings two solitary people together against all odds.

At one time was a #1 Bestselling Military Romance and also received the Goodreads Choice 2014 Nominee for Best Romance.

Note: This is an Australian Army romance book written with Aussie spellings.

Heartbreak Warfare is an emotional, gritty, and angst-filled love triangle that will rip your heart out, then hand it back to you in pieces while somehow leaving you grateful for the journey.

11. Pretend You’re Mine by Lucy Score

Luke Garrison is a hometown hero, a member of the National Guard ready to deploy again. He’s strong, sexy, broody. The last thing he’s looking for is a woman to ruin his solitude. When the wildly beautiful Harper stumbles into his life, though, he realizes that she’s the perfect decoy. A fake girlfriend to keep his family off his back until he’s deployed.