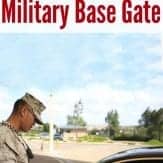 Ah, the military police at the gates. They’re the ones who stand in the intense heat, bitter cold and torrential downpours as they check ID cards. They stand for hours and skip meals. If they have a moment, it’s a quick one to swallow a few bites. 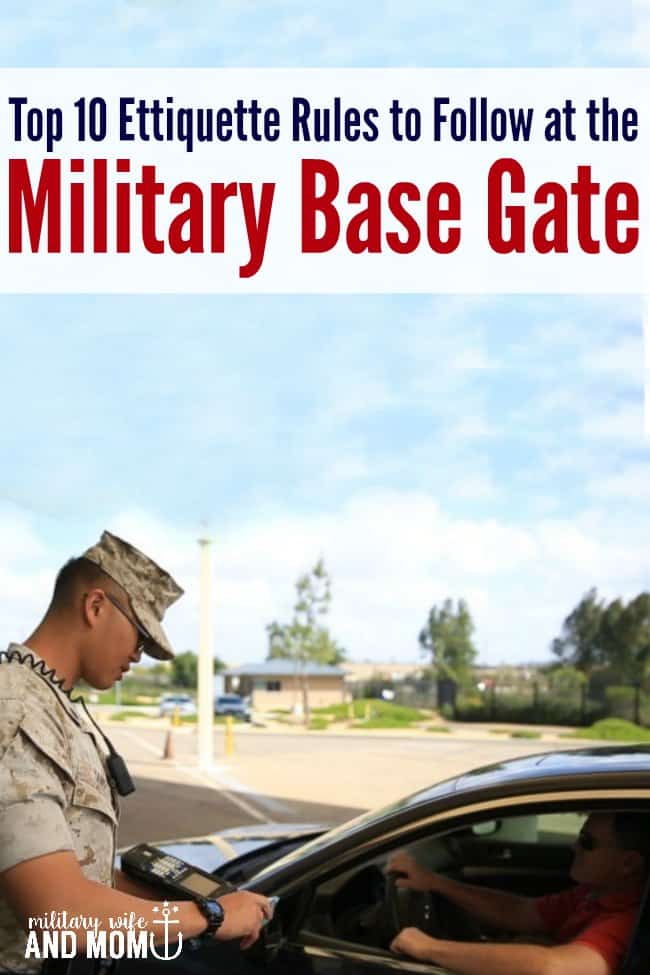 My husband was military police—or rather, since he is in the Air Force, he’s known as Security Forces. He did this for fourteen years so he knows things. Currently he’s training to be a MTI, but he’ll always have a soft spot for the military police. He always wants to be sure they are treated well, because sometimes while at the gate they encounter all sorts of things.

Here are tips to make life easier for yourself at the military base gates:

Please turn off your headlights if it’s dark. If you don’t, the military police get blinded. I made the mistake of forgetting once. Then they told my husband, “Dude, your wife totally blinded us.” Oops. Sorry. After that, I made sure to always, always turn off my headlights as I go through the gate.

Turn off your windshield wipers if it’s raining when you approach the gate. If you don’t, they get splashed with the water as they check your ID card. They’re probably cold enough as it is standing there.

Please don’t say “stay warm” or “stay cool.” You might be saying it kindly, but to them they hear sarcasm. It’s just how it goes.

Don’t ask “Oh, you’re checking IDs?” It’s safe to assume that there will be 100 percent ID card checks at the gate. Which leads me to my next point…

Be prepared! Have your ID card ready to go. Don’t dig through your purse. Don’t dig through a wallet. Have it out in a place you can easily grab it. I normally put my card in the drink holder. Granted, there have been times when I’ve gone to get my ID card and it went flying out of my hand. I had to pull over and find it in the backseat. Another time it dropped at the military police dude’s feet. He was polite enough to get it for me. Mistakes DO happen, but at least TRY to be ready to go.

If you don’t know where to go on base, don’t ask a billion questions. It’s okay to ask, “Hey, where’s the commissary,” but don’t follow it up with “And where’s the BX? Where’s the bank? What’s in the food court?” The cops have a line of cars to get through and if they take too long with you, the cars in their line get an attitude.

Please don’t argue if you’re asked to do a random vehicle inspection (RVI.) Some people behave like complete brats when asked to pull over. “But I have someplace to BE!” they might whine. Oh well. Let the cops do their job. It’s not always convenient, but know they are doing it to keep us safe.

Understand that sometimes the military police have to say silly things like, “Welcome to Tinker Air Force Base” even though you’ve lived there for five years. It’s because their commander told them they have to say it. It might sound cheesy, but they don’t have a choice. They are limited on what they can say. Tom told me the story about a fellow cop who got in trouble for saying “Have a blessed day!” because the person he said it to complained and said they weren’t religious.

Don’t complain over stupid crap. See above. Remember: these guys are standing out in the cold and in the heat. They don’t need to deal with extra nonsense.

If the vehicle line is long, don’t complain to the cop. They’re doing the best they can.

Remember that the military police are human beings. Sometimes people forget and think of them as robots that mechanically check ID cards. They deserve our respect. The next time you go through a gate, smile and thank them for what they do. They’ll appreciate it.

Are you new to this community? Start here, friend.
12.2K shares
Prev Post How to Get a Breast Pump Through TRICARE for $0
Next Post 21 Long Distance Friendship Truths Only a Military Spouse Will Understand