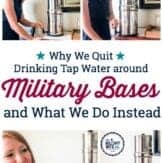 I never used to think about the water we drank.

In fact, I thought most people who worried about whether their water was filtered were a little high maintenance. I was a self-proclaimed “tap water girl.”

It was only once we were preparing to leave Okinawa a few years ago that I started to take a second look. A friend of mine explained how being a military base, a lot of chemicals had been buried into the ground or leeched into the ground from chemical spills and that it’s nearly impossible to get out of the water.

I stood there silently as I recalled going through my entire second pregnancy and a year of breastfeeding while drinking the potentially contaminated water.

Not a soul ever said I shouldn’t drink the water.

And as recently as May of this year, Japanese officials have continued to warn local nationals NOT to drink the water surrounding Kadena Air Base due to unsafe levels of contaminants. Even the Washington Post covered this big controversy.

After digging deeper into some of the water issues at Camp Lejuene and bases in South Carolina, it became obvious to me that this was an issue I was no longer willing to take a chance on.

Adding fuel to the fire, was a recent article that detailed numerous military bases that tested too high for dangerous water chemicals.

Halting the use of dangerous firefighting foams and switching to “safer” options is a start; however, the remnants of past chemical contamination remains. Once it’s in the water table, it’s not all that easy to get out.

Three Colorado communities are looking at an 11 million dollar bill to clean up their water due to firefighting foams used at Peterson Air Force Base.

But, I’m no longer willing to play Russian roulette with my drinking water, only to find out two decades later that it contained contaminants known to cause cancer and organ failure.

There’s another problem for military families with any water contaminants near military bases: It is very hard to prove.

With military families moving every few years, it’s difficult to know which water source may have contributed to disease. A disease that may not show up for 10-20 years.

To go back and say, it was this base that we lived at 15 years ago is a hard thing to do.

Regardless if the water is deemed safe or not, we do not drink the tap water.

For a while we were purchasing water from a reverse osmosis water station and filling four 5-gallon jugs once every week to week and a half. We would pour it into a water dispenser and used it for everything from cooking to drinking to making coffee.

The only problem with the jugs is they are heavy, and when we ran out of water, we would need to make a trip to the water station and get them refilled. On top of that, reverse osmosis does not reduce volatile organic chemicals (VOCs) or endocrine disruptors.

At home water filters like a Brita or PUR, aren’t enough. They offer basic filtration by reducing chlorine, but are not effective at removing VOCs, heavy metals, endocrine disruptors or fluoride.

(Side note: If fluoride has any benefit, it would be directly to the teeth, as drinking the fluoride has not been statistically shown to increase oral health at all. Additionally, fluoride has been linked to thyroid problems and other disorders when consumed internally.)

Here’s what we use now:

Berkey recently gifted us a water filter and dispenser, and we will never go back.

The Berkey filter gets out…

When it comes to filtering water in your home, this is the best you can get. You can read more about the Berkey test results here.

It’s really easy to use.

All you do is add more water in the top. It goes through the filter and into the bottom reservoir. Then viola, place glass or pitcher under spout and dispense. It’s easy to take with us if we are going camping or traveling somewhere with the car. Just take along and filter as you go. It saves on buying bottled water and the plastic waste that goes along with all of that.

Berkey has all different types and sizes of water filters, but the one we have is the 1.5 gallon Travel Berkey.

To help give back and spread the word about Berkey filters, I’ve partnered with Berkey to giveaway a 1.5 gallon Travel Berkey to one of YOU.

In order to enter, all you need to do is two things:

This giveaway will be open for one week (closes Aug 10, 2019) and I’ll name the winner in the comments and email the winner to get the shipping information. The water filter and dispenser will arrive to your doorstep directly from Berkey!

Are you new to this community? Start here, friend.
242 shares