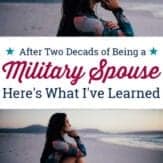 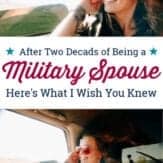 I often wonder what I would share with the young bride, who crossed through that sword arch on that warm July day more than two decades ago, about military life.

That’s the thing about perspective…

You have to get some life under your belt, jump over hurdles, endure some bumps and rough patches to find the deeper meaning.

After twenty-plus years of being a military spouse, the lessons I have learned are plentiful.

1. You can only prepare and plan so much.

Being a military family requires an ability to adapt and adjust at a moments notice. The sooner you accept this, the easier it will be.

I once longed for the “I wish” and “what if’s” but after years of experiencing curve balls in our plans, I learned to go with the flow and focus on what I could control rather than the things I couldn’t change.

2. Friends are not defined by geography.

I used to cry my eyes out every PCS. Saying goodbye to relationships that were important was tortuous.

At times, early on, I often wondered if building friendships was “even worth it” knowing we would all be saying farewell sooner than later.

In time and with many hails and farewells under my belt, I learned that making new friends was a blessing. We had an opportunity to meet people from all over the country, and perhaps our paths would cross again, and we could pick right back up where we left off.

And, if we never overlapped in the future, we were just a phone call away.

I can also reflect on every place we have lived and find the blessing (sometimes hidden–sometimes apparent). I wish I would have been more open to recognizing those moments while I was living them.

So many of my early days were spent thinking, ‘if only” or “when” and “then.” I now know that it is THIS moment that matters. Right here and now. I no longer live for the next thing. I work hard to embrace the current duty station, season, month, week, day, moment.

Owning a dream house with a white picket fence would not be how we created our version of a home. Military life taught me that we could turn any space into a warm, inviting place.

Because, at the end of the day, a house is just four walls.

Having moved more times than I can count on both hands, I now know that the people who inhabit the space I share are what make it home.

The saying, “Home is where the military sends you,” cliche, as it may be… it is real. Also, the upside to frequently relocating is becoming a first-class purger and organizer.

4. Service does not come without sacrifice.

I can say I have never been prouder having been married to a Marine. Our family has felt the pain of numerous deployments and family separations, but what I discovered is that service to others often requires sacrificing one’s self. 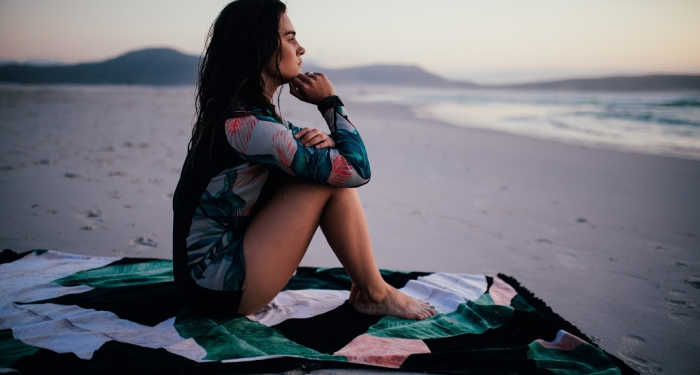 Although I will never enjoy deployments, I know that serving home and abroad is part of what makes military service so unique.

5. Military families have a special bond.

It is hard to describe it if you have never lived it. What I discovered was that there is no one who understands you greater than another military family.

Often there is no need to explain what you are experiencing to another spouse because they already “get it.”

Military families will open their home to a brand new family. If you need a favor, there’s an endless list of people willing to step up and show up, without keeping score. We do for one another. The bonds are lasting and lifelong.

6. Military kids are the most resilient people I know.

Once we had kids, I saw the military through an entirely new lens. Kids who grow up in military families have to say hello and goodbye more than most people. They develop resiliency and an incredible ability to adapt.

Though it is not always easy (far from it) most kids in military families can make friends quickly, avoid becoming too attached to inconsequential things, and well versed at dealing with change.

The key to raising kids in a military family is to find the bright side. They are watching us and feeding off our energy and attitude. Having kids has forced me to create a positive narrative in any situation.

And although it is essential also to allow them to voice their frustrations and concerns, most of the time they follow our lead. Our outlook is key.

7. Being a military spouse is also a calling.

I have learned over the years that my husband could not do his job as well as he does if I was not standing by his side. He may be the one who is in charge at work, but we all know most military spouses manage the homefront. I used to be shy about admitting this. Now I am affectionately referred to as the Long-Haired Colonel. I own it.

This is a life that we both agreed to be a part of, and with that means I have stood by his side through it all. It has been both an honor and a privilege. And while he has been able to chase his dreams, I have provided the steady, constant in our home.

My husband, many times throughout the years, has called me his center of gravity. Over two decades later, I finally believe it. It truly is a partnership. Family members serve something greater than themselves…right alongside their serviceman/woman.

Are you new to this community? Start here, friend.
952 shares 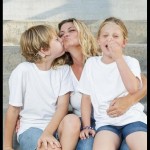 I am a military bride who writes about military life and raising kids with special needs. When I’m not preparing for the next PCS or searching for lost hearing devices—You can find me musing about being a military spouse, raising kids with hearing loss, and other things from the heart on My Battle Call, Facebook, Instagram and Twitter.