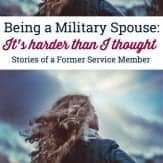 My first move as a military spouse and not a service member was unexpectedly hard. In the past, I would head to work and make friends and at least even when I didn’t know anyone, I had co-workers to spend time with throughout the day. I had a place to start.

But when we arrived at our new base my husband went off to work, and I stayed home. I knew one person who lived 45 minutes away. And while it would have been nice to drive to her house everyday that wasn’t feasible or practical.

Being a military spouse was…lonely.

Making friends was harder than I ever expected.

For the service member, the military creates an instant community. They arrive at boot camp and are there with all the other candidates looking to join the military. And they have an instant connection. They have to rely on each other to get through basic training.

The military forced me to open my eyes to the world. I’d get assigned to my unit, and there it was, my team and sense of community. Differences were put aside as we focused to the get the mission done.

My instant group of friends and network were quickly created at each new assignment. I got plugged into a recall roster and immediately have people to call if I needed someone. Certain assignments were more difficult than others, but I always knew that I could depend on the people I worked with. I found my sense of community there.

As a military spouse, I lost the luxury of instant connections.

Unlike the military workplace that brings new people into the team to get the job done on a regular basis. Opening up and allowing a new friend into your life isn’t always easy and takes time. It takes the courage of someone to step out to say hello and be willing to let you in.

And where does one even go to find new friends? Often in LA I would go to the playground in attempt to make new friends. My son would start playing with a little boy or girl and I would finally get the courage to talk to his mom only to find out it was his nanny, his aunt or grandma.

I also searched for friends by joining a Bible Study, instead of finding a group of young moms, I found empty nesters. And it was only by chance I met a girl at the gym who saw that I had a bag tag to the church we attended. She was brave and reached out to me. We became friends and through her I got connected with other young moms and was able to build my community.

Even with her help getting me connected it still it wasn’t easy or instant. I remember shortly after getting connected to the group finding out about the Friend Thanksgiving they had.

An event I didn’t receive an invitation to.

I had finally starting to get connected, and then they had a celebration, and I wasn’t even invited. I had to confront the person who held the party and tell her how I felt.

She had grabbed the wrong email list to send out the invite and since she knew my parents were visiting, she didn’t follow up with me because she assumed, I couldn’t attend. It was true, I couldn’t attend, but I was so close to walking away when I didn’t think I was invited.

And it seems like fate each time we move the first person I get close to is slated to move within the year. The good part about this is I get connected to someone who already has formed a community and I can use their friendship to start building new friends through them, but it does not make it easy.

Comparison can steal your joy.

But being lonely can’t compare to a great community. Even though when it is time to say goodbye, it is hard. And it is easy to remember what you feel like at the end of a great assignment. Where you got connected and made friends. But you forget that even at the beginning of the great assignment you were once lonely too.

When I was in the military starting over didn’t feel overwhelming. It was a new adventure wherever we went. The people I worked with were always coming and going. New people would fill in where the old people had been. It was ingrained into my everyday life. Somehow switching from military service member to military spouse switched my thinking. I started to like the community I had built and moving again felt like a lot of work. Work I didn’t want to do again.

As a military spouse moving is more than just the next assignment in a new location. It is uprooting our whole life. It means finding new schools, meeting new people, building our lives all over again. And it isn’t just me anymore. It is my boys too. And as my husband heads off to work at his new job. I am left behind to manage our family, our life and all the boxes each PCS brings.

I guess what I’m trying to say is that if you struggled with this, you are not alone.

For me, I found living in the role of “military spouse” to be harder than I thought. At times it felt defeating, lonely and isolating. I remember many times when I felt envious of my husband diving right into his instant connections, where I was left to rebuild all of mine.

But like they say, a building goes up one brick at a time.

And that’s how community begins. With one new friend. And then one friend becomes two. Until before you know it you have found your community again.

Are you new to this community? Start here, friend.
7.1K shares 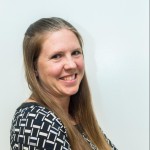 Amanda is a military spouse and veteran who served in the Air Force for six years as a Civil Engineer including a deployment to Afghanistan. She traded in her combat boots for a diaper bag to stay home with her two boys and follow her husband’s military career. Her blog Airman to Mom incorporates stories from her past military life and how she views life through her unique life experiences of both a veteran and military spouse. She recently launched a podcast sharing the stories of Women of the Military.

Prev Post Dealing With Controlling Kids? The “Secret Sauce” for Gaining Cooperation
Next Post 17 Most Powerful Essential Oils for Stress and Emotional Wellness