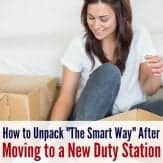 We recently moved from Tinker AFB in Oklahoma to JBSA-Lackland in San Antonio. I won’t lie, we had some stressful moments.

We’re still unpacking, because we have a lot of stuff. You’d think by now, we’d learn to read up on PCS moving tips and KonMari our house or at least minimize the clutter. But there are ways to get through all the boxes without completely losing it.

While it’s still fresh in my mind, here are my top tips for unpacking after a PCS move. 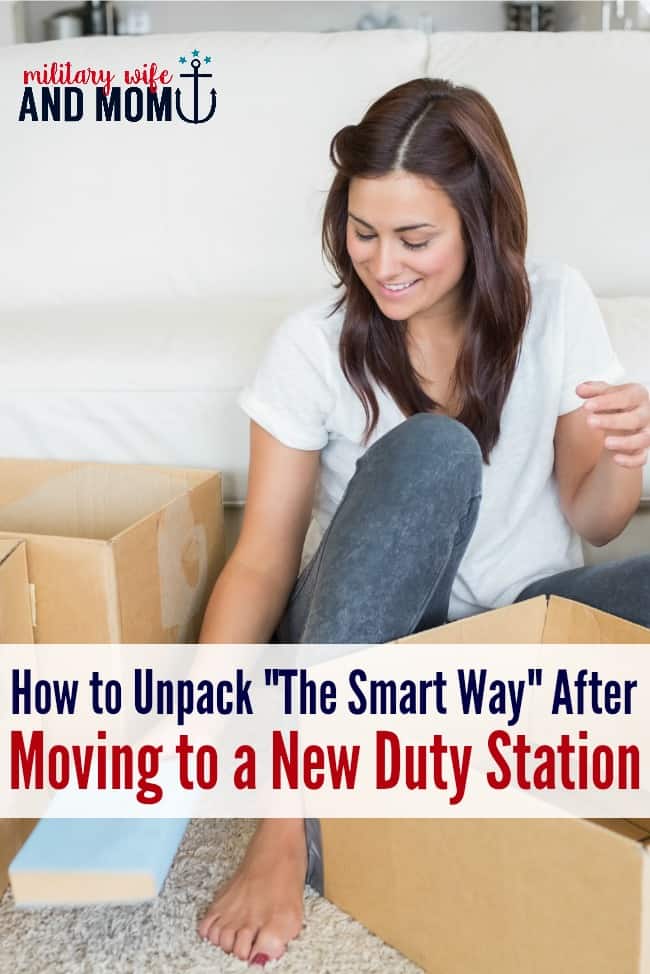 If your moving company packed all the screws and nails in a Utility Box, find this first! We couldn’t find it for the longest time, so it was frustrating when we couldn’t put things together. Apparently most moving companies do this now because they found when they taped the screws to the item, sometimes the screws would come undone. If you do lose a screw, go to Lowes. They have tons of screws.

One room at a time.

Try to focus on one room at a time. If you do too much, it might get overwhelming. We started off getting the downstairs bathroom together and then branched off to the larger rooms.

Fold as you empty.

Fold down boxes as you empty them. Otherwise before you know it, you’ll be surrounded by boxes. Folding down boxes is important because most trash companies won’t pick them up unless they’re flattened. Our trash company wants boxes flattened, plus wrapped in twine. We were like ???

Invest in a good box cutter. Or use scissors, but whenever I’d use scissors I’d set it down and forget where I placed it.

Hang up pictures quickly. Or try to. I was worried they’d break on the ground and they did take up a lot of floor space. However, my husband has his military stuff, so I had to wait until he knew where he wanted his stuff before I could put other photographs up. I was able to get the pictures up that belonged in certain rooms, it was just the living and dining room where I had to wait.

If you have kids, try to get their rooms done so they’ll stay out of your way.

Related: How to Help Your Kids Feel at Home After Moving

Make sure you take photos of everything damaged. Don’t immediately toss broken picture frames–you can get reimbursed for it.

Don’t try to do everything at once. Trust me, I HATE being surrounded by boxes but I knew I’d get flustered if I tried to do too much in one day.

If you’re missing a box, check the garage. I didn’t have all my clothes and I found the proper box sitting in the corner of the garage. Why it was put there is beyond me.

Don’t believe what is written on boxes. Sometimes it would say BOOKS and it was really DVDs. Or silverware.

Related: 10 Things You Forgot to Put on Your PCS Checklist

Offer free boxes in local Facebook groups. We did this because we wanted them out of our house. Most of the time we had someone wanting the boxes.

Try to make sure you have all the boxes labeled for certain rooms in that room. Granted, sometimes the boxes aren’t labeled properly, so you might open a box that says KITCHEN but you find a bunch a socks…

Have easy meals to prepare. I personally didn’t feel like cooking when I was unpacking so we had a lot of oven pizzas and rotisserie chickens.

Run silverware and other kitchen utensils through the dishwasher. They’ve been sitting in a stale box and I never know what would be on them. I’m sure nothing, but I’m weird that way.

Give the kids “assignments.”

If the kids insist on helping, let them pull out all the paper that sits in the boxes. My daughter liked making a pile of the paper and then she would jump on it.

Roll out the carpet.

If you have any area rugs, find them and set them out. They’ll probably be misshapen and will need to unfurl. Most of ours were wrapped separately but we did find some in boxes.

Remember that episode on Friends when they made a fort out of boxes? If you need some laughs, try this. It’s fun. Even as an adult.

Moving in can be a long process, but it’ll be done at some point. If not, put the boxes into the garage and get to them later. I’m kidding. Sort of. We do have quite a few boxes in the garage and we’ll get through them at some point. But for now, at least we can walk around our home without bumping into a box. So that’s a plus.

How to KonMari your home….The Life Changing Magic of Tidying Up by Mari Kondo

Are you new to this community? Start here, friend.
1.3K shares
Prev Post The Best List of Popular Places That Offer Military Discounts
Next Post How to Give Your Kid a Birthday Party They Will Always Remember