A few weeks ago I published a post called The Real Reason Being a Military Wife is So Hard, and while the responses were overwhelmingly positive, there were several responses showcasing the self-destructive military spouse wars occurring in the community. Written months prior to publishing, I wrote it sitting on my couch alone in a foreign country with my husband deployed. I wrote what I was feeling in that moment as I was struggling with military life.

The majority of the time, most military spouses maintain a positive outlook on military life. It provides families with blessings and opportunities. It helps spouses grow and become strong, independent women. It’s allows military spouses to travel the world and meet amazing people. But of course, there are times when it feels hard and military life is a struggle. There are times when you need to vent with humility and courage and say, “This is hard.” 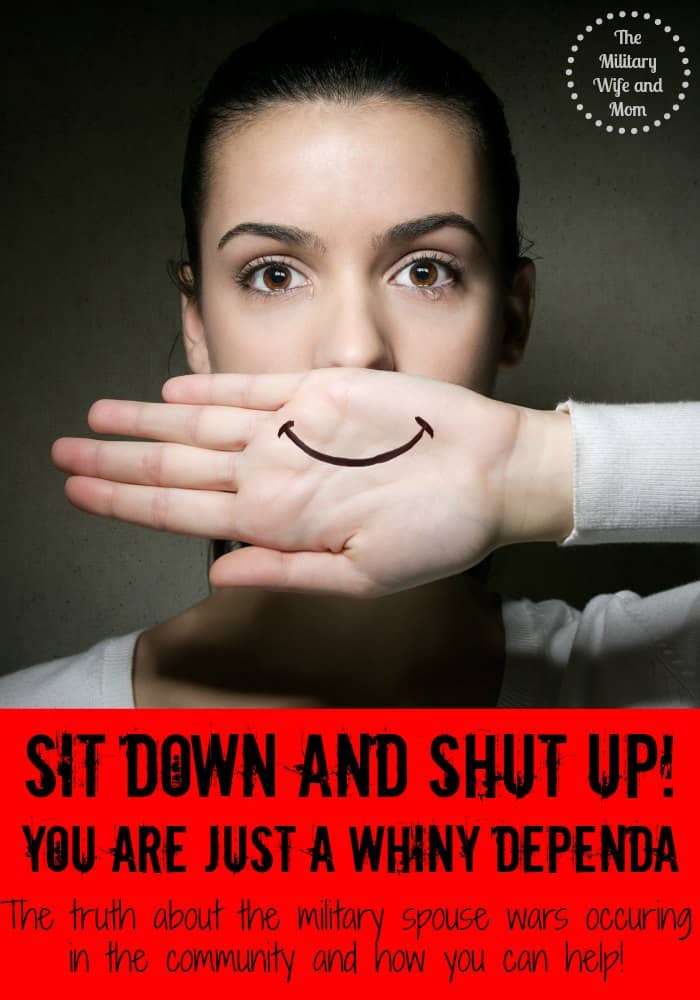 It doesn’t mean that we have it the “hardest” or the “worst” or that no one else has it hard either. It doesn’t mean any of those things. It simply means that you feel that it is hard sometimes.

Now is the time to help create awareness of this problem in the military spouse community, to help us learn and grow, to help us unite and to help us create a more positive, supportive, and welcoming community. Because we are all in this together…

“I guess some of us handle it better than others, and some feel they need recognition (dependas). *cough cough”

If you don’t already know, you may wonder what exactly is a dependa or dependapotomus?

According to Urban Dictionary, it is “Traditionally a service-members dependent who is a “stay at home mom” that doesn’t do a damn thing all day besides sitting on the couch looking remarkably similar to jabba the hut leaching off of military benefits and eating anything that gets too close.”

Military spouses are independent, loyal, educated, strong, smart and savvy women. These military spouses are amazing wives, and you know, they still struggle just like everyone else. Admitting to struggling is a brave and courageous thing to do. Most aren’t willing to do so. When you see a fellow military spouse struggling, encourage her, help her and guide her.

“I would never in my wildest dreams ask my husband to stop going for his dreams. Ever.”

I asked my spouse to only get out if it is what he truly wanted. That he shouldn’t leave for me, which is exactly why he chose to stay. When we parted ways, it was on the best of terms. We loved each other but didn’t necessarily see our lives heading in the same direction. I think that is a sign of true honesty and maturity—to be realistic about what you are willing to live with before you get married.

Spouses are giving up their dreams too…

Very few people recognize that service members ask their spouses to give up their dreams equally as much. In my personal situation, my spouse wanted me to give up my job and my life to move to be with him and join along for his life and his dreams. Let’s face it, if you want a relationship to work, you probably don’t want to be long-distance forever. It is discouraging that as a culture we often expect women to give up their dreams as if it is our duty. While asking our male counterparts to do the same is something you shouldn’t do “ever.”

There’s a higher level of scrutiny occurring, as if being in the military means that your calling is always higher or more important than anyone else. Asking someone to change jobs is not a request that should be taken lightly, and it should always be asked respectfully with the utmost thought and greatest intentions. At the same time, however, it’s important to be realistic about what you are willing to live with in the long run, rather than committing to a promise you aren’t able to keep.

“Sounds quite whiny & needy. When you have a good relationship, you will be just fine.”

One of the most challenging parts about the military community is that you are supposed to sit down, shut up, and suck it up. Stop complaining. Stop whining. I get it–a minority of spouses cried wolf one too many times, and people are sick of the complaining. 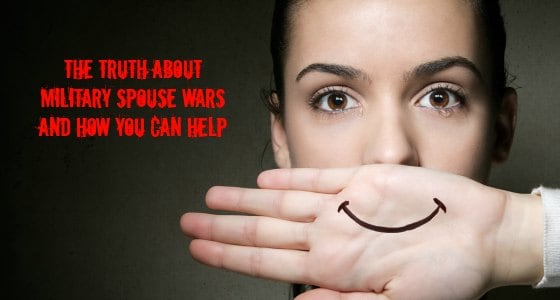 However, the majority of spouses are sharing their struggles in an effort to cope better and to work through real issues in a healthy and constructive way. We all know that one of the most unhealthy things that you can do from a psychological standpoint is bury your problems and never talk about them. It’s okay to say things are hard. It’s okay to say that you are struggling and talk it out. It shouldn’t be taboo to share that you are an imperfect military spouse who isn’t “just fine.” Many spouses with the strongest marriages still struggle.

“Deal with it. Being a military spouse is much easier than what your husband does.”

“It’s not that hard….I would NEVER ask my husband to choose career or me, never. When you love someone so much these things, these problems are just obstacles!”

So for a moment, I think we all need to be a friend, open our arms and say, “I know you are struggling, but you can do this! I will help you.”

“Sorry but the ONLY thing that is hard for the wife is she misses her husband.”

I don’t think this is the true experience for most military spouses. There are many facets to military life that are hard for spouses, and I think we are doing ourselves a huge disservice by over-simplifying, minimizing and dumbing it down.

What is exactly a WESPAC widow? According to Urban Dictionary, it is “A US Navy wife who f*@^s around with other men while her man is out on deployment. Named for the West Pacific, or WestPac cruise, which is a common and lengthy deployment for West Coast sailors.”

There are many service members cheating on their spouses while they’re on deployment. Women take the heat for this behavior and are hated, but there are guys who do this garbage too, and there doesn’t seem to be the same level of hate or vitriol for them.

I think it’s important to choose our words wisely. Just because a spouse is sharing her struggles does not mean she is an unfaithful wife.

You can encourage and empathize and truly help other military spouses who are struggling.

We are one military spouse community.

Are you new to this community? Start here, friend.
412 shares