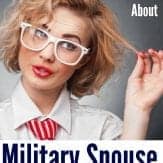 You might hear this infamous stereotype time and time again—military spouses are lazy, uneducated, and by the way, they never work. It’s kind of irritating actually. Especially if you are a spouse, like most are, who is hard-working and supports her family equally as much as her spouse.

There are a lot of reasons why military spouses are both unemployed and under-employed, meaning most military spouses take jobs in which they are over-qualified because they cannot find work to match their skills. 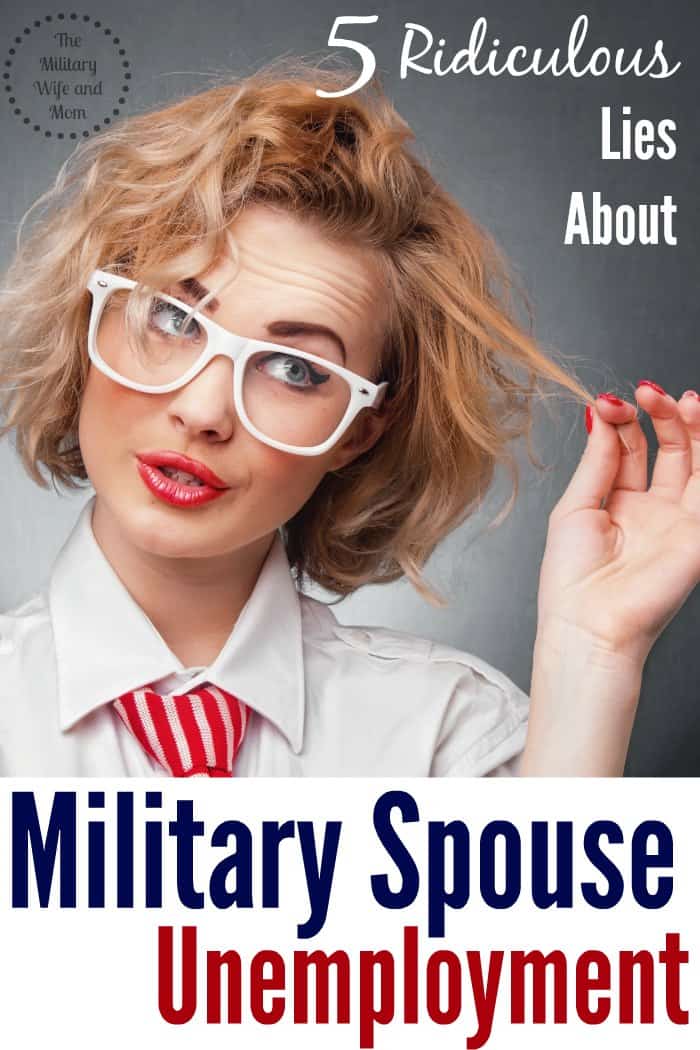 Lie: Military spouse jobs are easy to find after moving.

Truth: Many military spouses are frequently out of work due to preparing for or recovering from a military PCS move.

I cannot tell you how many military spouses I know who found great jobs in their local area, worked hard, made advancements, and then had to quit a year or two later due to a PCS move. With each military mandated move, military spouses are forced to start over in the job market. Looking for work in a specialized field of work takes time and energy.

Recently, a friend left her job as a nurse one month before a PCS move. Following the PCS she worked hard to find employment and landed a job within a few months. The problem is the government agency took over 6 months to complete her hiring process. This is the norm for many government agencies. So from the time this spouse left her job until she officially started getting paid, we are talking 9 months. That’s crazy when you realize she will likely move again within 2 years of starting the position. A 9 month gap in employment is a long time for a military spouse with an education and excellent work experience in a job market that has openings. What does the employment gap look like for spouses with less than ideal circumstances?

Are you a small business owner, a marketing manager, a cosmetologist, a financial planner? These jobs provide limited positions and make it challenging to get hired after moving around from duty station to duty station.

Lie: Military spouses use their service member’s job as an excuse not to find work.

A 2013 study discovered “there is not a lack of desire to work that is causing these gaps; over 55% of respondents indicated they “need” to work, while 90% indicated they “want” to work.” (Source).

I believe that most military spouses would love to work if the right circumstances presented themselves. Like many military spouses, I gave up my career to stay-at-home full time. Given the stress that my husband’s military career puts on our family, we agreed together that having one spouse home full-time to manage the children, the household, and all of our general life affairs was imperative to our long-term happiness. Many military spouses want to be able to stay home and care for their children because it’s what is best for the whole family, not because it’s easier than working at a conventional job.

Lie: Military spouses get hired equally as much as civilians.

Many organizations are ambivalent over hiring military spouses, knowing they won’t be around for long. It’s plain and simple: Companies want to invest in long-term employees in in order to avoid costly expenses associated with high employee turnover.

In addition, many organizations are reluctant to hire prospective employees with short employment stints and gaps in unemployment all over their resume. Military life takes the everyday career woman’s resume and makes it look shady.

The biggest problem is often that a military spouse cannot complete a degree at a given university or college before it’s time to PCS again. At this point, spouses often leave a university, transfer as many credits as possible, and start again. It’s incredibly frustrating that credits do not transfer from university to university. A military spouse may take a class over and over again, despite passing on the first go around.

Nowadays, many military spouses are turning to online college degree programs to better meet their needs. This is a great option for spouses coping with frequent moves, but at the same time, it’s unfortunate that spouses are not able to enjoy a traditional university experience.

Lie: Military spouses turn down jobs they think are beneath them.

Even after obtaining an education, it’s still be a struggle to find job. 90 percent of working military spouses report being underemployed. This means that military spouses possess more formal education/experience than needed at their current or most recent position.

Moving from duty station to duty station it’s challenging to find work in a niche specific area. And if you think all military spouses should just go work at just any under-paying job that comes their way, then you might as well say service members should get out of the military and go work at Banana Republic.

What needs to be done?

Military spouse unemployment and under-employment is an issue deeply rooted in the military community. This is not an individual military spouse issue in my opinion. Here are a few realistic solutions that I believe could make a huge improvement for military spouses across the board:

What do you think is the real reason military spouse unemployment is so high? Let’s chat in the comments!

Are you new to this community? Start here, friend.
5.4K shares