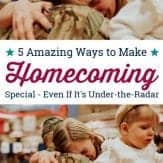 We all love the pictures and videos circulating around social media of military homecomings. Who doesn’t get teary seeing large crowds with their creative welcome home signs? I love watching these videos as much as anyone, but not every service member who deploys gets to experience such a grand homecoming.

While the media primarily features high-profile homecomings, there are ways to make your service member’s under-the-radar homecoming special, despite the absence of a large, cheering crowd.

My husband deployed as an Individual Augmentee (I/A) to Afghanistan a couple of years ago. He was the only service member from his command to deploy, so his send-off consisted of our three kids and myself saying goodbye to him at the curb of our local commercial airport.

We watched him lug his two sea bags inside the terminal before the doors closed behind him- signaling the start of his nine-month deployment.

I think I was still in my pajamas.

I don’t remember even getting out of the car, just sliding over to the driver’s seat. We’d said our goodbyes at home.

I was determined to make his homecoming special.

I knew we would be picking him up nine months later from this exact spot: The commercial airport baggage claim.

He wouldn’t be wearing a uniform.

But I knew he’d be returning from war, and I vowed to give him the proper homecoming that he deserved.

Just after we’d hit the halfway point in the deployment, my wheels started spinning about a welcome home party. Even though he wasn’t returning until October, I snatched up all of the patriotic-themed paper goods and party décor on clearance July 5th. Half-price red, white, and blue M&M’s? Yes, please! Into the cart!

I worked on an invitation list and visited restaurants to inquire about catering options (taste-testing baby-back ribs is never a bad idea).

This party-planning distraction was just the lift I needed to help me through the last dragging months of deployment.

I knew he wouldn’t want a big party right away, so I set the date for about two weeks after his return when he was well-rested and ready to be social.

There’s nothing I love more than when a problem presents itself and the answer is shopping.

Dressing up was a way to mark the day in the history of our family, and show respect for the magnitude of the occasion.

(Yes, I decided that we needed coordinating outfits.)

In the final weeks of deployment, I was desperate for a distracting project, and shopping fit the bill. I chose blues and whites for the kids’ clothes, and let my pink dress be the “pop” of color. This doesn’t have to be costly. I found all of our clothes at TJMaxx and the Exchange on base.

We could have made our own clever signs on giant poster board, with sayings like “Out of our way, we get our Daddy home today!” But, my kids weren’t into it.

I opted for a simple lei from the base flower shop to greet him with. Hawaii was our first duty station as a married couple, so a plumeria lei was symbolic for us.

Whether it’s a DIY sign, flowers, or even a bag of his beloved hot Cheetos, show him you put some thought into his homecoming!

Related: What Military Families Wish You Knew About Homecoming

I had played out our reunion with my husband over and over in my head during the deployment. Each time, the kids and I were hugging and kissing him and then I was fumbling with my phone trying to capture the epic moment with a picture.

The last thing I wanted to do while reuniting with my sailor was to stop and mess with my phone. So, I did something a little over-the-top. I booked a professional photographer.

Before you book with a photographer, make sure they are familiar with military homecomings.

We could only provide her with a two-week window of when the photo shoot would occur. We couldn’t give her the exact date and time until the day before his homecoming when he was finally on American soil and had a commercial flight confirmed. It’s much like booking a birth photographer who must be on-call for when it’s go-time!

While my kids didn’t love having a photographer capture them staring at the airport monitors, searching for their dad’s flight, I don’t regret the decision for a second.

The pictures we have from that day when he finally arrived are not staged, show the pure joy of a family reunited, and will be treasured forever.

Related: The Photos You Didn’t Take With Your Service Member

If it was up to my husband, we would have eaten at the Taco Bell drive-thru on the way home.

But you know what?

He is a smart man. He knew I had gotten dressed up, had my hair professionally blown-out, hired a photographer, wore heels, and this celebration wasn’t just about him.

I’d survived the deployment, too.

So, we took the kids out to a special lunch. We rarely eat out anywhere beyond Chick-Fil-A or In-N-Out Burger, so this was a big deal.

We made our way to Duke’s, and told the kids to go crazy and order whatever they wanted.

And from our oceanfront table, high up on the bluff with barking sea lions below, we clinked our Mai Tai glasses together- a “cheers” to us.

Are you new to this community? Start here, friend.
325 shares 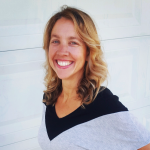 Kara Ludlow is a reluctant Navy wife since 2001. Proud momma to 3 kids. At the KaraLudlow.com, she offers an honest glimpse into modern military family life and encouraging others in the same boat. Connect with her via Facebook or Instagram.