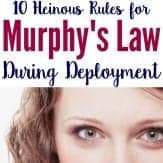 Murphy’s Law is simple: Anything that can go wrong will go wrong.

As a new military spouse, I heard rumors that things would break unexpectedly during deployment. I admit that at first I scoffed at the spouses who said this. Maybe they just weren’t very comfortable with home repairs?

Or they weren’t taking care of car maintenance? Surely some military spouses utterly exaggerated their deployment stories. Things couldn’t be that bad during a deployment…right?

And then my husband deployed.

All the things that break during deployment (told in GIF’s)

1. First, the door of your relatively new minivan will stop opening. Turns out the motor can fry. Since you use that door around 1,524 times a week to get your kids in and out of the car, you’ll decide it’s worth it to replace it. A year later (during the next deployment!) it will break again. C’mon door, you had one job!

2. Technology is always a favorite victim for Murphy’s Law: During one deployment, your darling kiddo will throw a sippy cup at your laptop. Completely. Killing. The. Computer. Later, during another deployment, darling child numero dos will take a hard plastic toy and smash the iPad screen. WHY???

3. During a more recent deployment, your kid will proclaim they are old enough to make basic things in the kitchen. Or so you think. Because said child also doesn’t know the rule of “don’t put aluminum foil in the microwave.” So…it explodes. (Oh trust me, we haven’t even gotten to the good stuff yet.)

4. Speaking of replacing things, your deployment budget should include replacing at least one appliance. There’s a good chance your oven will spark and catch fire before you even start cooking! And deployment seems to be the perfect time for laundry machines to leak or explode. Just because.

5. Another thing you learn REALLY FAST about deployments: Hide all the Sharpies. All of them. PLEASE do not skip this step. Because the kids will find them, and decide to draw on the furniture. Or the walls. Or the white rug. Or your brand new homecoming dress…for no other reason than “her brother told her to do it!”

6. Then there are car accidents and car repairs. Maybe you hit someone, or someone hits you. Or maybe a cop pulls you over for speeding, and in your haste to get off the road, you take out someone’s mailbox. Because yeah, I’ve done that. I’ve never hit a fire hydrant, but I’ve probably got it coming to me.

7. The thing about Deployment Murphy is that things just break, often for absolutely no reason. You’ll have a doorknob fall off the door, towel rods come off the wall, and a curtain rod crash down. (OK, that last one will happen because a kid was hanging on it). But still… things just break.

9. Ahhh, kids. I mean, when a parent is deployed they want to challenge all the house rules. But this is usually the time when the totally take it to the next level. Do they really need to take off a diaper and draw all over their walls with poo? Or dump out the sugar bowl and throw sugar all over the kitchen? Or try to stuff an entire roll of toilet paper down the drain?

10. Finally, just accept the fact that every deployment will have at least one trip to the Emergency Room. Possibly because your weirdo neighbor wanted to chop a watermelon with a machete and asked you to “Please YouTube it for him.” Lots of blood and tears, but somehow you will all live. You’ll really, really dislike spending half the night at the ER, but hey, at least Tricare is there if you need it!

So I’m here to tell you, fellow military spouse: deployment Murphy is just like a Twinkie. It’s never going away. You have to accept that during deployment things will go wrong, stuff will break, people will get sick, and kids will make really bad choices. There’s no way to prevent it! All you can do is laugh about it, keep rubber gloves handy, and eat a Twinkie. Might as well.

Are you new to this community? Start here, friend.
506 shares