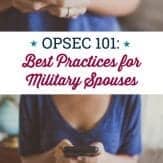 If you are a military significant other or spouse, then you have probably come across Facebook groups with rules stating that members must “Remember OPSEC!” You may have used one of these groups to ask a question about deployment, only to have several people jump all over your post, screaming about military spouses violating OPSEC. What is OPSEC and what does it mean for military spouses and significant others? This article will tell you everything you need to know about OPSEC.

The term “OpSec” stands for the phrase “Operational Security.” It generally means safeguarding information that details: 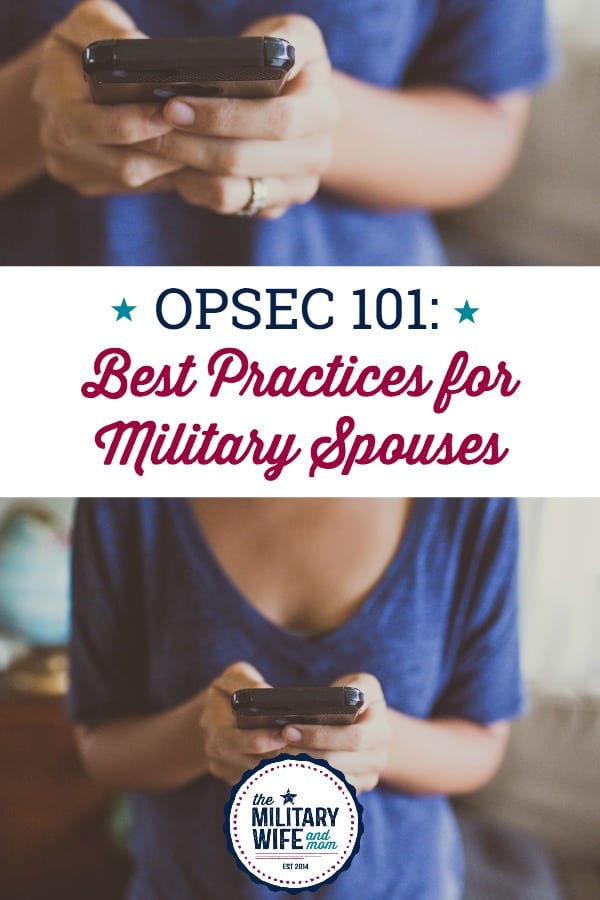 The phrase was coined during the Vietnam War, when the military learned that the enemy fighters (the VietCong) were able to predict American locations and movements based on scraps of conversation that locals heard at barber shops, bars, or tattoo parlors. American soldiers were speaking too freely in public, discussion upcoming missions and schedules. They assumed no one was listening, since the locals all spoke Vietnamese. But they didn’t realize how many people could understand English and make reports to the VietCong. Since Vietnam, the military has mandated OPSEC training for service members.

What are the OPSEC rules for military families?

Military family members are not typically required to go through specific OPSEC training. But sometimes, family members are the weakest link in the OPSEC chain. Today, the greatest threat is information that is shared online, particularly on social media. Even on profiles set to “private,” certain images and posts can be seen by anyone. When these reveal details about a military branch, unit, or a deployment, then a military spouse or family member may be putting their service member at risk.

While there is some discussion among spouses over what is or is not an OPSEC violation, here are some good rules of thumb:

(My husband’s unit is going to XX base for the next 15 days. I’ll miss him so much!) The enemy could use this information to target troops on the move or to gain details about troop strength at specific locations.

PLEASE don’t share Homecoming countdown pictures with a specific date, or posts saying, “just 33 more days until I get to see my soldier!” Many military Homecomings involve over 1,000 troops arriving on the same ship or at the same airport. Providing too many details puts all those service members at risk for a strategically-placed explosion. Units have been known to delay or change Homecomings when too many family members discussed dates online.

There is generally no reason to share your spouse’s unit online. But if you do, make sure you don’t discuss details about their specific job, the size of their unit/squad/platoon, and how many individuals are out on a patrol.

It might be ok to say that your spouse is deployed overseas and even to give a generic location like “The Middle East.” But you never want to state a specific base or FOB in an online post. Enemies could use this information to try and impersonate your service member or target you. This also means: don’t post your spouse’s deployment address online. Share this information with family members on the phone instead.

Don’t share something your service member tells you in confidence.

Just because your spouse tells you when they plan to arrive at their next port doesn’t mean that information is safe to share with the world. Even though information from your spouse is very exciting, think before your post it online. And if you tell your parents or in-laws, make sure you give them a warning about posting it too. If the information reveals troop movements, dates, unit size, or location, then it should not appear on public posts.

Think before sharing the picture your husband sent of him standing in front of his vehicle in the field. While this may seem harmless to you, any bit of information is useful to the enemy.

What about OPSEC in news articles?

This is a gray area that confuses a lot of military family members. If information is already released in a public news article, either in a newspaper or online, then surely it is already common knowledge and safe for you to share, right? Well, yes and no.

Yes, if a news article appears on a DoD, military, or official unit site, then it has been cleared for release by the Public Affairs Office and doesn’t contain any threatening information. If you look closely, you’ll notice that most of these articles announce troop movements after the fact (the unit left on Tuesday). Or they use vague generalization (They will deploy to XX country for at least six months). These edits make them ok for public use. Please don’t jump all over a fellow spouse and yell OPSEC violation when they share a news article from a legitimate public source!

However… you should still think before posting news articles on your own social media. If you share an article from a local paper saying, “This is John’s unit, say some prayers for them!” then you have announced your spouse’s name, unit and general location to the public. You have also shared that you will be home alone for the duration of the deployment. It is not difficult to search social media using keywords and hashtags that will turn up military family members connected to a unit. The more news articles you share, the more you are making yourself a target. While such articles may not be an OPSEC violation, they could be damaging to your PERSEC (Personal Security).

One more note: never share news releases of casualty information, unless it says that families have already been notified. There are too many cases of military spouses learning of their service member’s death because of another spouse’s Facebook post. News companies generally do an initial release of information before families are notified. Then a few days later they will release names and additional details.

But my settings are private, so it’s ok to share, right?

Well… this is another gray area. First of all, even when your setting are at the highest level of privacy, your profile picture and bio are visible to anyone, even if they don’t reach out to you with a friend request. Too many military spouses include a profile picture of their service member in uniform, and the term “military spouse” in their bio.

If you tag photos with a location or check-in, then it is easy to determine which base you live near. It only takes five seconds to determine that this is a military spouse connected to a specific branch, at a specific base. And if the service member’s uniform shows their name and rank, then someone could use those details to impersonate them online.

I’ve seen this happen hundreds of times!  Someone meets a “service member online,” who suddenly has “no access to money” and “the military will not pay for him to come home.” These are adversaries who find photos and information about service members online. They will then use the information to impersonate them and scam vulnerable people.

Check your profile and bio to see if the information in them is really what you want to make public.

Also, remember that the weakest link in your privacy settings is your own friends and family members. Even if you post something generic, they may give away details in the comments. Or they may re-share your image, which makes it visible to all of THEIR friends. In general, don’t share anything in private that you don’t want to be public, especially if it is about your service member.

Are you new to this community? Start here, friend.
3.5K shares